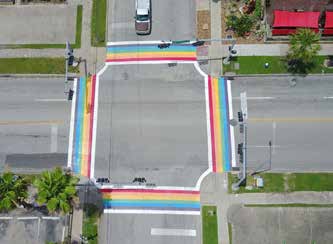 Project Summary
We helped to create the first Pride crosswalk in Texas. Alex Hill was killed in the intersection, in a hit
and run crash in January 2016. A Mini Mural also was painted at the intersection.

UP Art Studio was commissioned for the crosswalk’s design and implementation.

Pride Houston donated $15,000 to help fund the project’s design and construction. It gained additional support from The City of Houston Mayor Pro Tem Ellen Cohen (who championed the project), The Montrose Center (as fiscal agent), and Traffic Engineers, Inc. (who donated the traffic plan).

UP Art Studio recruited Harper Brothers Construction and the Montrose Management District as partners, to assist with the traffic plan implementation and maintenance of the project.